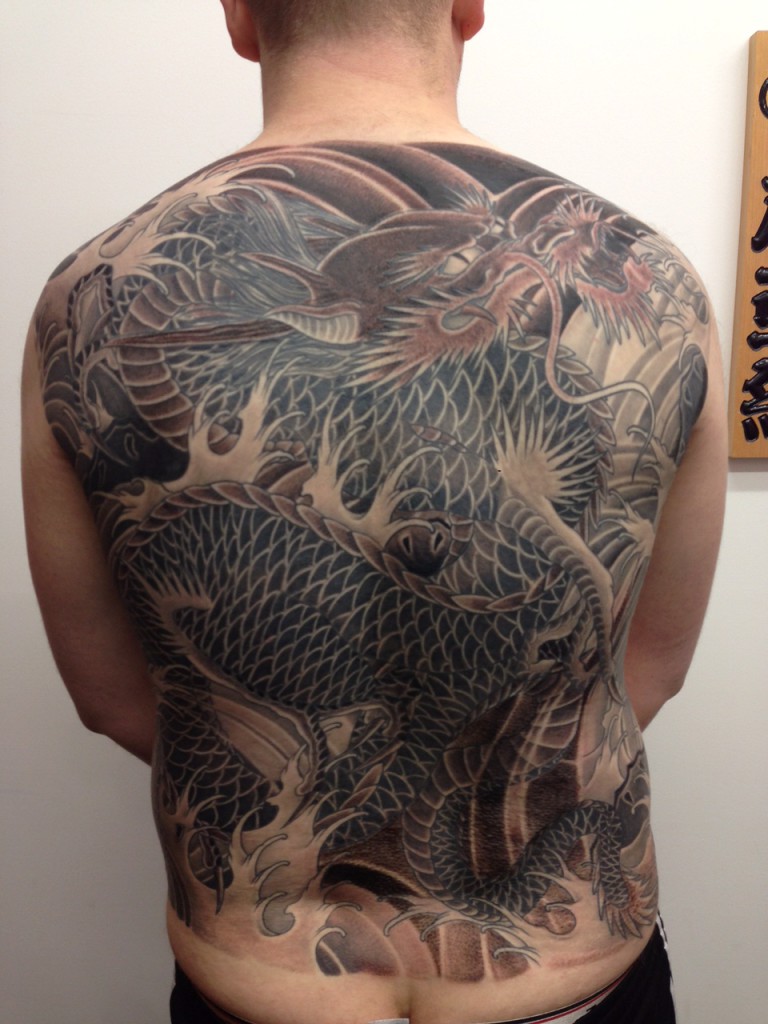 The Japanese tattoo is an ancient and well respected art. A rich history filled many influences, nuances in culture, and generations of talent have produced some extremely notable works of art. Japanese tattooing is iconic worldwide.

Traditional Japanese Tattoo is the decoration of the body with Dragons, Phoenix, Kois, geisha’s, samurai along with flowers such as cherry blossoms, peonies, chrysanthemums and maple leaves and other images from myths and tales. Japanese Tattoos today are worn to represent a persons belief, character or aspirations. 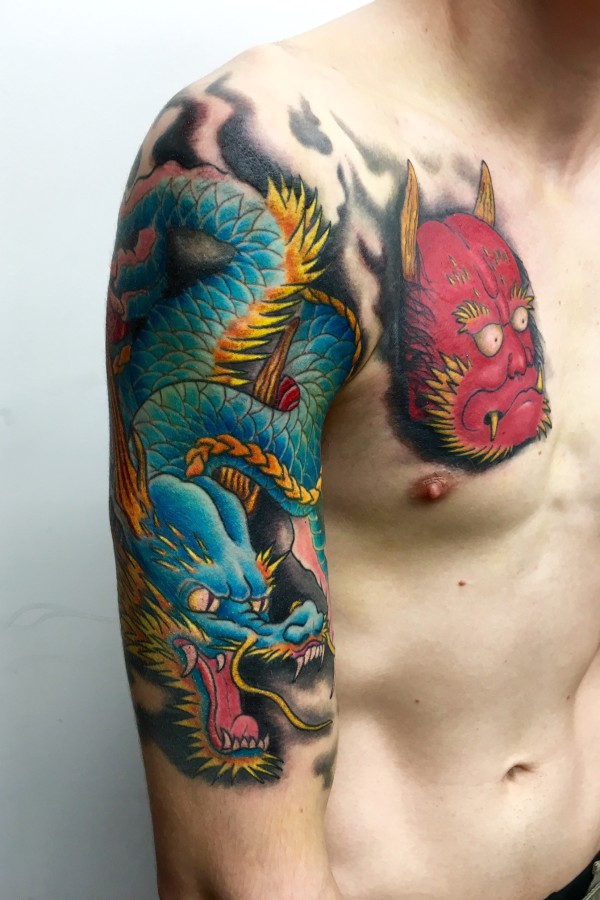 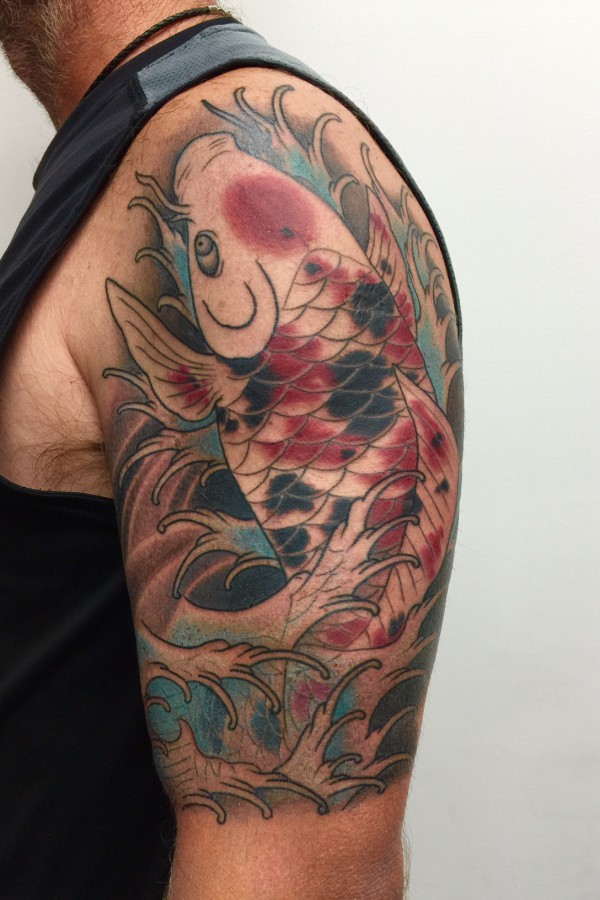 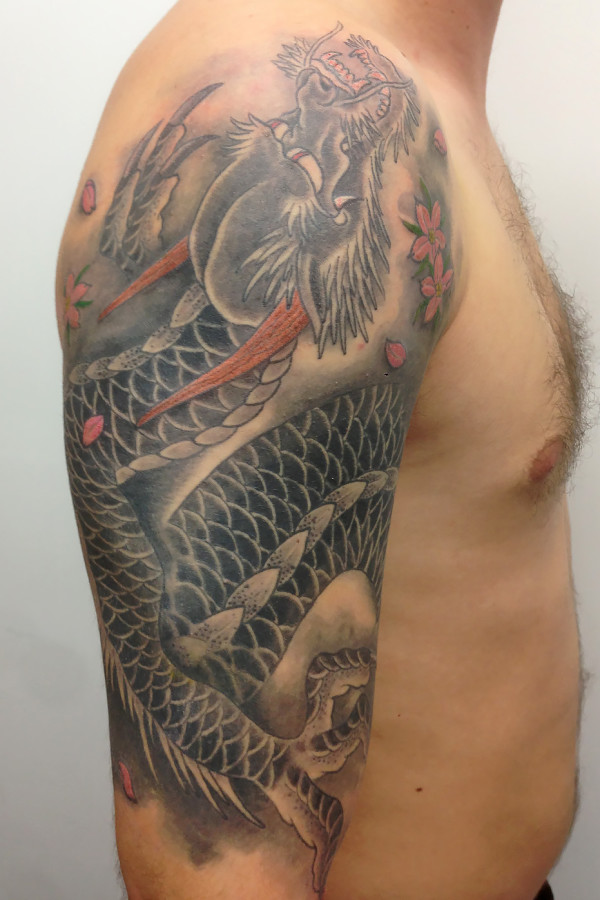 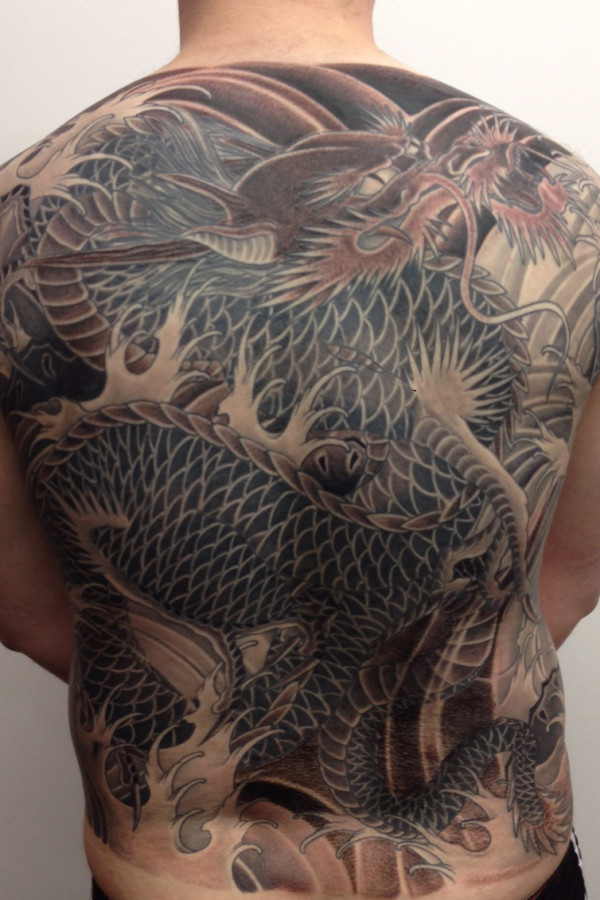 We have specialist artists at Primitive Tattoo who can combine the many Japanese symbols most frequently used to give you a striking individual piece of art to give you a custom tattoo lifetime piece. Our tattoo artist Marc Pinto is a specialist in this Japanese style, with a comprehensive knowledge of these symbols. 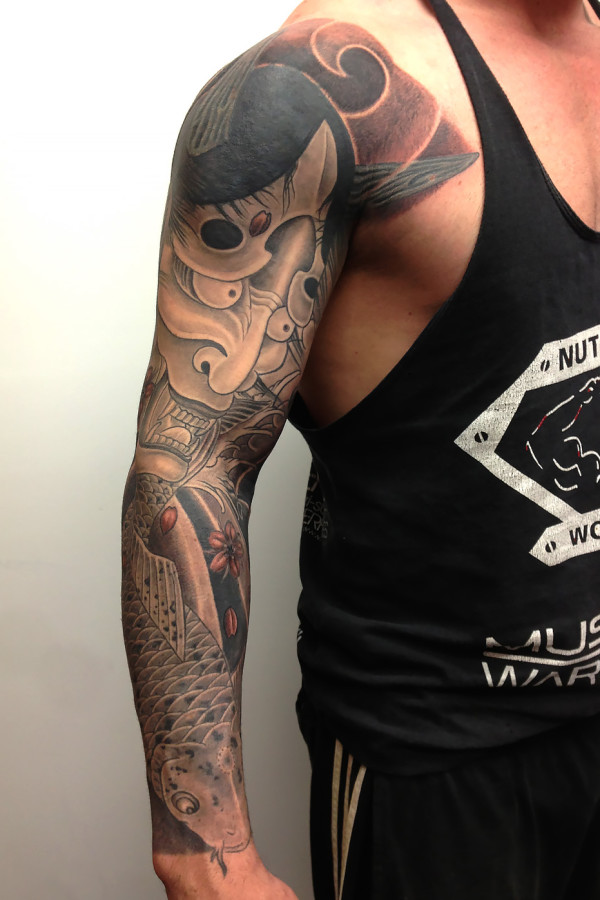 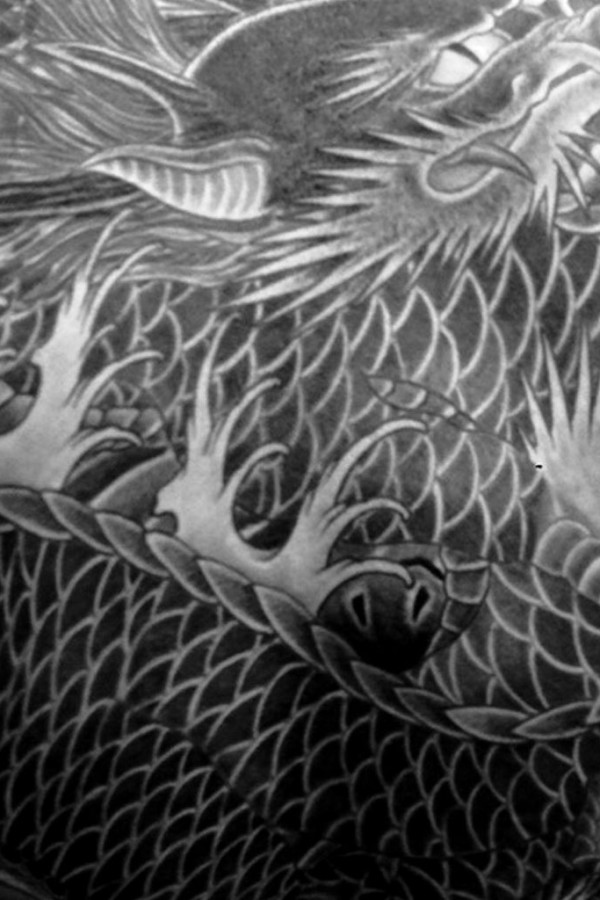 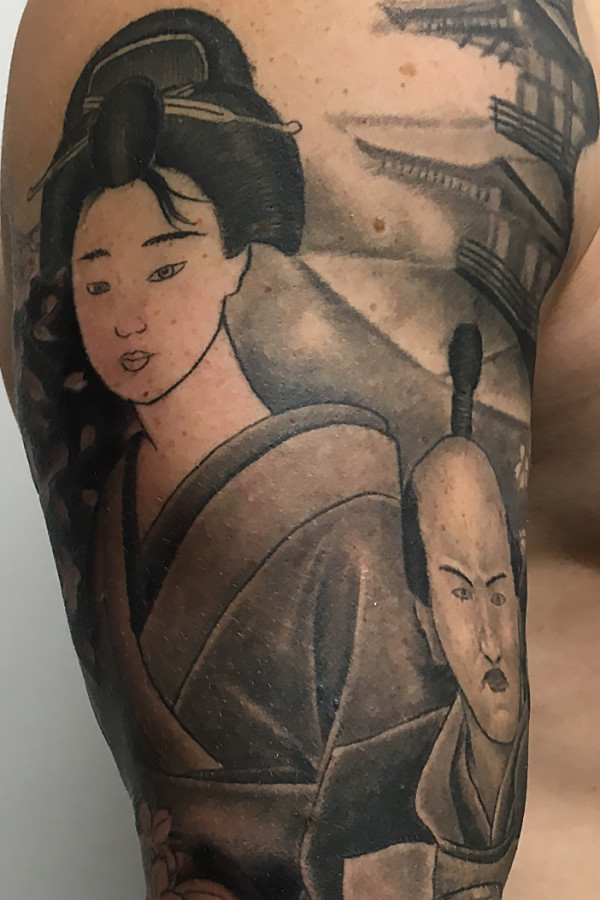 The most frequently used symbols in Japanese style tattoo are:

The dragon takes on characteristics of the many animals it encounters through its life. The Japanese dragon can have the eyes of a demon, or even a rabbit, the ears can be those of a cow with the neck and abdomen of the snake, and the scales of the koi. The Japanese dragon is usually the bearer of profound blessings. Like other Oriental tattoo designs, if you choose the dragon it is generally an aspiration to the qualities of great goodness, wisdom, and power.

Where Should I Place My Dragon Tattoo?

Mostly dragon tattoos work perfect on arms, upper half sleeves and full upper back. There are lots of dragon tattoo designs and we can design a beautiful custom piece for you. 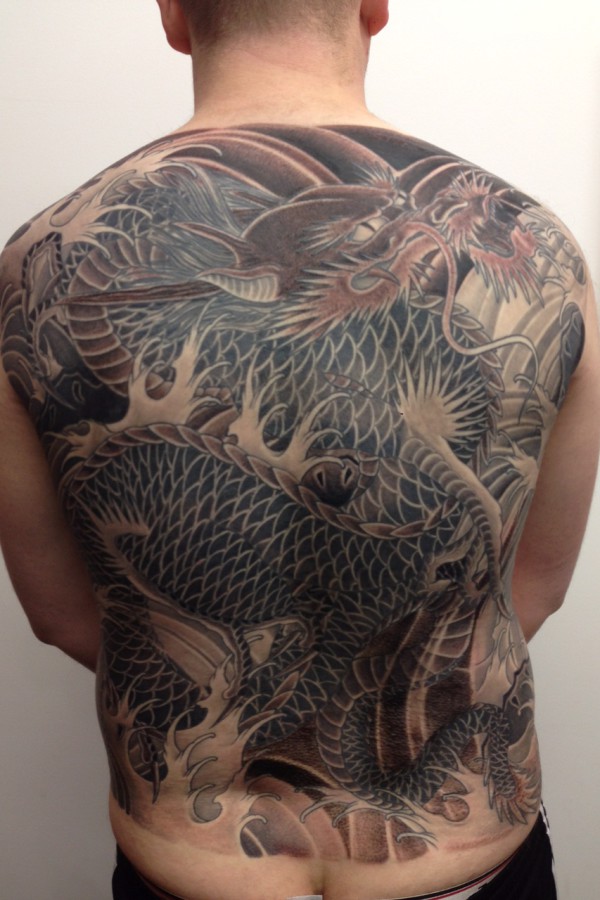 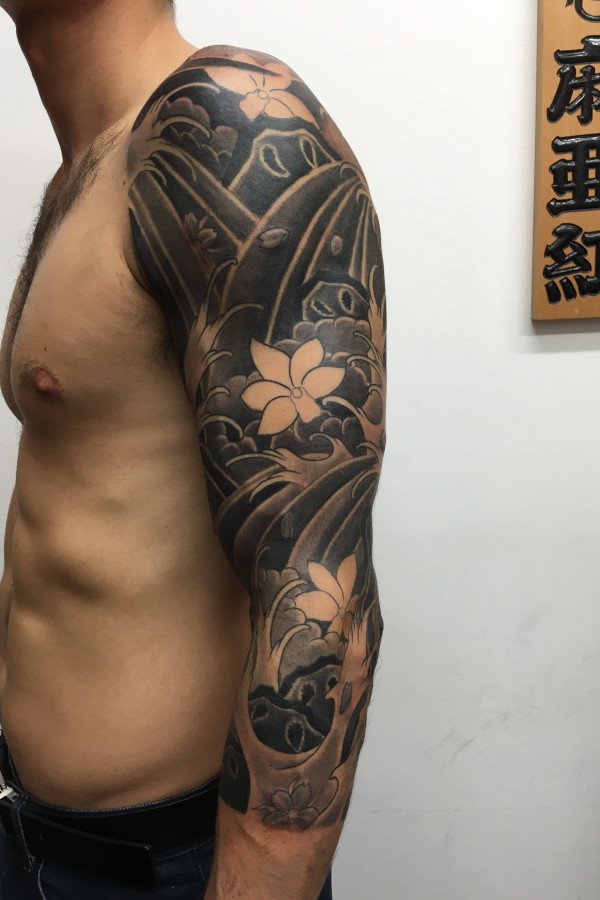 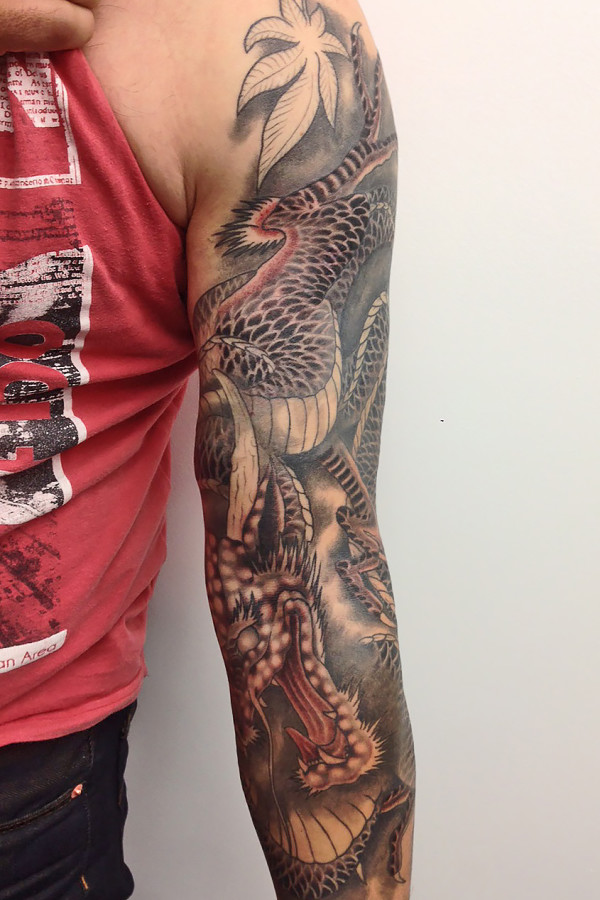 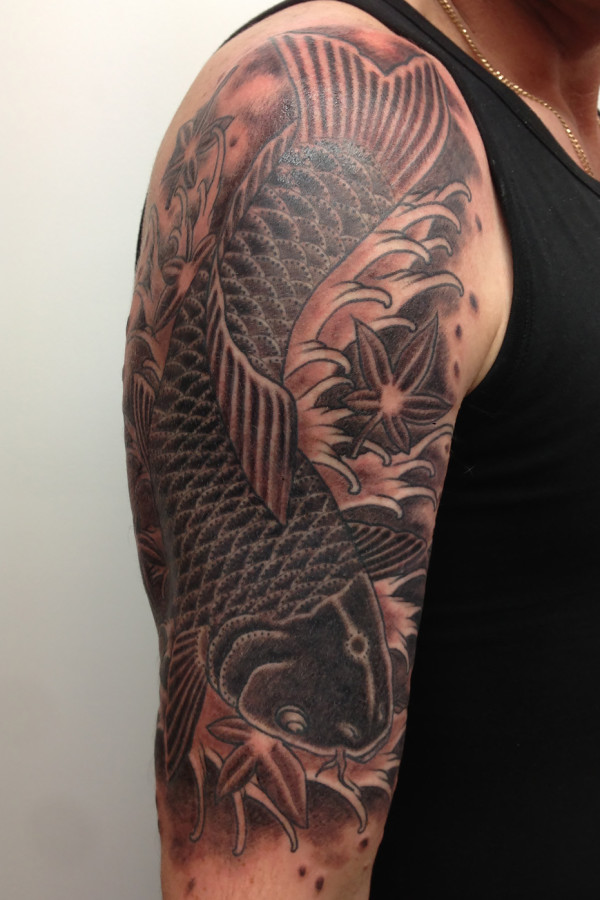 Generally, traditional Japanese koi tattoo designs are one of the most popular and beautiful among tattoo designs, adorned with vibrant hues and exquisite shading. The scales of the koi fish design are particularly prominent and are featured in a rainbow like colours. The backgrounds can consist of some creative ideas, like lotus flowers, water, sun, moon and cherry blossom. A koi fish depicted traditionally, is designed as an orange golden fish, which stands for good fortune. There may also be some designs showing a number of koi fish swimming in different directions.

Where Should I Place My Koi Tattoo?

The tiger is called “Tora” in Japan, one of the most holy of cats. Representing power, courage and longevity. They ward of bard luck, illness and demons in Japanese culture. Tigers are often depicted fighting demons (Oni) . They represent a perfect metaphor for domination, power and territory, untameable and strong.

Where Should I Place My Tiger Tattoo?

If you’re ready to ink the holiest of cats, make sure you place it where you can enjoy it. Remember that tigers represent power and strength, so consider placing a tiger on the back, legs or outer thigh. 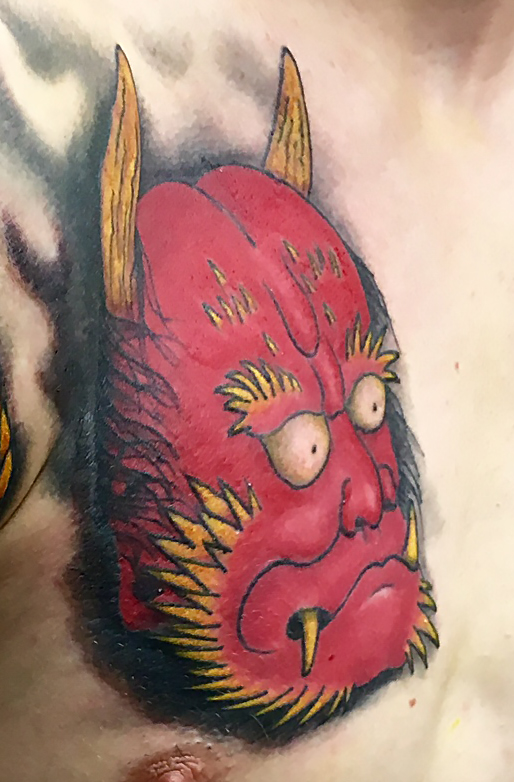 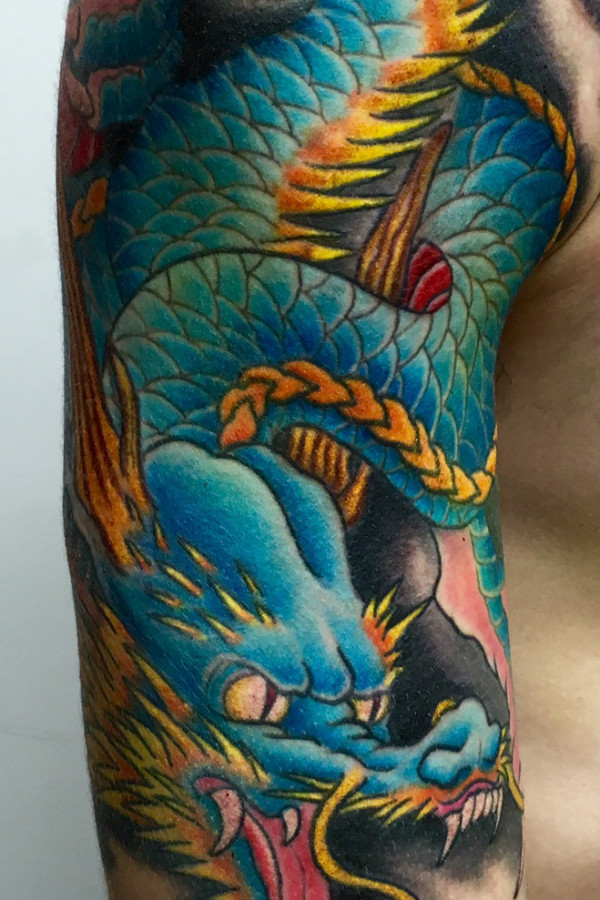 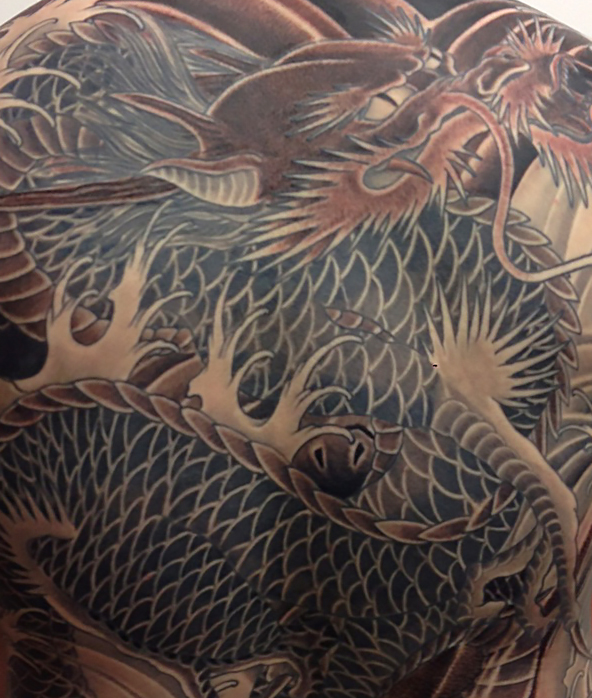 The oni, or horned demon, is a popular image in the Japanese tattoo artwork we do at Primitive Tattoo. They are almost always shown with horns, their faces can be quite varied, similar to noh masks, and are typically pink, red, or blue-grey.

In general, oni are fearsome supernatural creatures, they have been described variously as guardians of Buddhist hell, demons who act as torturers there, carrying out the punishment given by the queen of hell to the convicted souls that find themselves being judged for the evil deeds in life.  Also as pranksters, devourers of human victims, hunters of sinners, and bringers of disease and epidemics.

Onijin is an all powerful oni that is considered a king of the oni and can be depicted as powerful, and self absorbed, but can still be over-powered by righteous forces or deities if necessary in order to re-balance an out of balance society or clan.

Where Should I Place My Oni?

To take full advantage of this powerful image, it works best on the chest, back or upper sleeve.

The skull often interpreted in tattoo designs as anger, fear, danger or death. It was originally used to represent the symbol of  “great change” and “celebration of a great life”. The skull traditionally meant an acceptance and embrace of  our mortality “embracing the new”.  The skull is a symbol used to celebrate and show respect for people who have passed.   It’s highly probable that it’s association with death grew because of the fact that death is the greatest change that we will experience.

Where Should I Place My Skull Tattoo?

The skull works powerfully on its own – we find upper arm as part of a Skull Sleeve. One of our  talented tattoo artist could easily come up with a great design to cover an entire arm or leg.

The hannya mask is one of the many different types of masks used by the traditional Japanese Noh theatre. The hannya mask is specifically used to represent a vengeful and jealous woman. Her anger and envy have so consumed her that she has turned into a demon. The pointed horns, gleaming eyes, fang-like teeth, combined with a look of pure resentment and hate are tempered by the expression of suffering around the eyes and the artfully disarrayed strands of hair, which indicate passionate emotion thrown into disorder. The deeper and more extreme the colouring of the face, the deeper and more extreme run the emotions of the character. Tattooing takes full advantage of these fanciful and engaging images, often using them in larger pieces of Japanese work or sometimes juxtaposing masks of good and evil characters.

Where Should I Place My Hannya Tattoo?

The Hannya mask design looks great in any size, whether small or big. The Hannya mask is often paired with another element, like a snake being one of the most popular examples. What’s great about a Hannya mask is that we can create for you a very personalised mask.